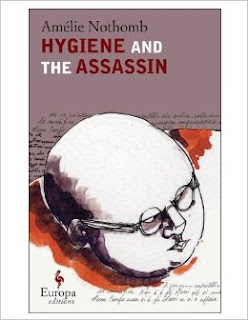 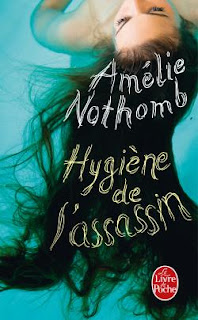 I'm excited to be reviewing the first work by a Belgian author to be featured on mychitalka. I picked up this novel based on a recommendation that it would be an interesting and suitable book to read for an intermediate speaker of French. I must say that I much enjoyed this novel. It is diabolically unique and refreshing, and I hope to read more of Nothumb's work in the future.

Perhaps you have already heard of Madame Nothumb? She is one of the most famous contemporary francophone authors. Her biography, in fact, rivals the 'out there' subject matter of her books. Northumb was born in Etterbeek to diplomat parents. She grew up in Japan and...in a case of life imitating art.... her first novel "L'Hygiene de l'Assassin" was (partially?) based on her childhood experiences. As a child, she and her older sister feared growing up, puberty and all that that entailed to the point where they starved themselves for a period of time. When they both began eating again, both sisters developed a real 'hunger' for writing. The rest is history...

In truth, no one can fault Nothumb for a lack of originality. "L'Hygiene de l'Assassin" is about as strange and unorthodox a novel as you can get your hands on these days. It is about a reclusive, obese, terminally ill Nobel prize winning author who decides to grant a select group of journalists interviews (one by one) before his death. Now in the beginning, the novel seems to have a rather simple plot; the crabby, but wily old author has his fun with each of the journalists (none of whom are his match or have even read his works!). He mocks them, belittles them and sends them away in various states of physical or mental distress. However, things take a far more interesting (and bizarre) turn when the author finally meets with the last journalist. This journalist has done her homework. She has actually read all of the author's 29 books but in addition to that...she has unearthed the long buried sinister past of the author.

This journalist's interview with the author is filled with revelations; for the reader, the author and even for the journalist- as she realizes that she is to assume a far greater role in the life of the author than she anticipated.

And so what is the book about? Let me take a stab at this? Perhaps the fact that authors and creative geniuses, in Northumb's mind, are a race apart. They live in a different dimension and under different (aesthetic and moral) laws than the normal populace. There is of course a great beauty and a burden to this that can not easily be understood.

I suggest reading this novel and arriving at your own conclusion to what the book is about. It wouldn't be too hard of a read in the French for an intermediate to advanced French speaker. The book is available in English as well. Much recommended.

NEXT UP: mychitalka travels the world with: 1) another tome on Soviet collectivization; 2) Beliy's "Petersburg" (still working my way through...) 3) a Norwegian bestseller; and 4) the first book by a Rwandan author to be featured on the blog
Posted by Anya at 2:05 PM No comments: 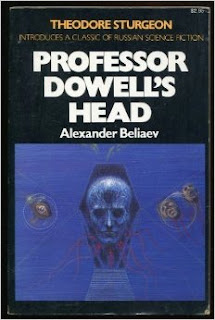 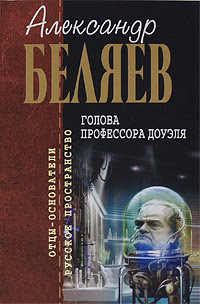 We return to the world of early Soviet science fiction with another work by Alexander Belyaev- "Professor Dowell's Head". This is another book based on 'mad science', where two scientists have discovered a means of keeping decapitated heads alive after death. Greed inspires the more 'evil' of the scientists, Dr. Kern, to claim the discovery for himself...through murder.

A young assistant hired by Dr. Kern soon learns of the terrible medical secrets his lab contains. As the 'head count' increases in the lab, the young assistant's life is placed in more and more peril as the evil Doctor stops at nothing to win fame for being the first, true-life Dr. Frankenstein.

This book is short, interesting enough and can be read in a few hours. Similar philosophical questions to those posed in Belyaev's other book, "Amphibian Man", are posed here. In both books, scientists claim that their frankensteinian work is ultimately for the better of the humanity, as it will eventually result in human evolution or the prolongation of human life. But is the advancement of science always for the greater good? Throughout "Professor Dowell's Head", the (other) scientist, in fact, aids Dr. Kern simply in the interests of advancing science, despite knowing that Kern is a man of no scruples who would have no qualms about misusing his discoveries for more sinister purposes.

I would recommend "Professor Dowell's Head" for intermediate learners of Russian. You should have no difficulties here.

NEXT UP: The first Belgian author to be featured on mychitalka 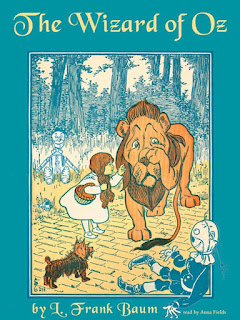 I think I honestly would have given this book a higher rating had I not read it a thousand times when I was a child. The novelty of the story was gone, after countless re-reads and having seen the film. I'm also not even going to bother describing what the book is about as its so well known...but perhaps I'll mention a few words about the author.

The book was written by L. Frank Baum (1856-1919), a native New Yorker and son of a wealthy business man. Baum grew up on a large estate which he looked upon as a sort of paradise. He was a young, sickly, daydreamer of a child who was schooled mostly at home. He started writing early in life and was even bought a cheap printing press by his Father.

In adulthood, Baum became a prolific writer and had a love for the theatre, often acting in plays. Later in life, Baum moved to South Dakota and apparently, his description of Kansas in the "Wizard of Oz" was based on his own experience in drought ridden South Dakota.

"The Wizard of Oz", by the way, was published by Baum in 1900 and was a big success. Baum later went on to write many sequels to the novel. "The Wizard of Oz" is, however, a lovely book for those who haven't read it, and much recommended. The only lingering question in my mind, is why on Earth didn't the good Witch tell Dorothy that she had what she needed to come home to begin with? (Was she simply using her to get rid of the other Evil Witch?)

Interesting fact: in 1905 Oz reportedly declared plans for an Oz amusement park. He apparently meant to buy an island of the coast of California for the purpose. 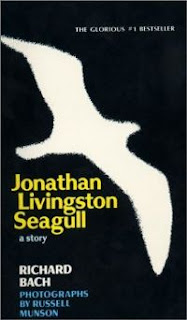 Our next book gives us a glimpse into the (possible?) lives and aspirations of the common seagull. "Jonathan Livingston Seagull" was a famous novel written by American author Richard Bach (1936 - present). I suppose the book was inspired by Bach's own lifelong love of flying and aviation.

Bach was born in Illinois, then served in the US army in various capacities (including as a pilot). "Jonathan Livingston Seagull" (to be further referred to as JLS) was a number one best seller in the States and made Bach famous.

And so now, the book is very very short. (In fact, I think that there were more illustrations of seagulls in my copy than text!). It is about a seagull named Jonathan Livingston who decides that he wants to live for something more than eating and keeping oneself safe from predators. He decides to break with convention and dedicate himself to learning learning difficult flying maneouvres. Jonathan's orthodox ways (predictably) do not go well with the rest of the seagull flock, and as a result, the young seagull is unceremoniously banished for life.

However, in exile, things start looking up for Jonathan once he has 'a close encounter with another kind' and realizes that he's actually not alone in considering his pursuit of aerial perfection the ultimate goal in life.....

The book later branches off into reincarnation and other new age subject matter; about the continuous reincarnation of seagulls until they ultimately do realize the true meaning to their lives and then start to perfect themselves instead of just living to survive.

Now, I find reincarnation a fascinating subject, however, this book was for me far from fascinating. It was very short, lacking of meat or character development and in my view, really far from one of the greatest works every written. It wasn't terrible, but more one of those "Chicken Soup for the Soul"-type reads, as opposed to being a classic. 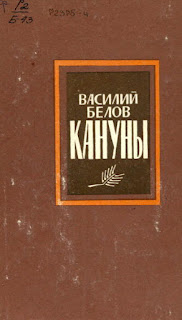 Now I must admit, I wasn't too fond of the compilation of short stories I read not too long ago by Vasily Belov and sort of wondered if he even merited a place on the Russian National Library List. However, the book I'm just about to review, "Eves", has completely changed my opinion on the matter.

"Eves" is a very interesting novel that follows an entire Russian village that is forced into collectivization in the 1920's. (It is actually the second novel I have reviewed here on the subject; the first being Sergey Antonov's "The Ravines".)

Now, Belov introduces us to the village almost all at once, as the villagers are about to celebrate a holiday Though as a reader, I was slightly overwhelmed at first with the sheer number of people Belov was introducing me to, it was a very interesting literary technique and Belov really succeeded in making me feel as if I was actually in the village, seeing all of the villagers swarming around me. Throughout the novel, I appreciated how Belov continued to immerse the reader in the daily lives of villagers, allowing the reader to observe them at their daily work and on various holidays.

And to be sure, there are some rather memorable villagers in "Eves". Among others, there are layabouts, hardworking peasant families, an impoverished former aristocrat, a 'revolutionary' priest, some average villagers and a group of  government officials charged with collectivizing the village.

In contrast to Antonov's kinder and more forgiving portrayal of government officials, it is fairly obvious from Belov's overwhelmingly negative portrayal of Soviet government officials that he didn't at all approve of what they were doing. Ignaty Sopronov, who leads the charge to collectivize, is in particular portrayed as a wicked, antisocial little man with absolutely no redeeming characteristics. (There are few people that I have despised more in literature!) He is juxtaposed against the main 'hero' of the novel, a hardworking young man named Pavel Rogov who works day and night to realize his dream of building a windmill for the village. Despite having done nothing to deserve it, Sopronov despises Rogov more than anyone, as likely for Sopronov, Rogov symbolizes everything to be envied and thus despised.

Another main character is a one of the higher ranking village officials, a young man named Mikulenok. Although he is portrayed as an easygoing, non-vicious sort of person, his lackadaisical disinterest in anything aside from his own superficial interests proves ultimately to be almost just as harmful to the villagers as Sopronov's active venom.

And as such, be warned. The book is a very interesting glimpse into a long-gone period of history, however, it is by no means up-beat. Belov introduces you first to a happy, healthy village with laughter and dreams, but there is no doubt of how things will come to their predicted and inevitable bad end.

It is of note that "Eves" is actually the first part in a trilogy of books by Belov that I will most definitely continue reading. 2.5 out of 3 for me.

NEXT UP: "The Wizard of Oz", "Jonathan Livingston Seagull" and Andrey Beliy's "Petersburg"