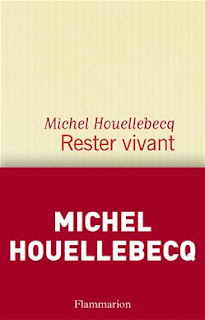 "A dead poet can no longer write. Hence the importance of staying alive." (self translation)

I present yet another review of a book by an author whom I truly love. "Rester Vivant" (something like "Staying Alive" in English) was one of Michel's earlier books. This tiny little novel was published in 1991 and even predated Michel's first novel "Extension du domaine de la lutte", which I reviewed earlier this month.

This little novel is narrated by someone who provides advice to the aspiring poet. This unnamed narrator also provides insights into his own reasons for putting pen to paper.

Like all of Michel's works that I've read to date, this novel is deeply touching and draws you very close to the author/narrator as a result of its sheer honesty and force of emotion. The passages in the book are, as well, simple, yet so beautiful and profound that they resonate within you. I, for one, couldn't help but note down many, many passages to re-read again and again at a later time. They say that writing something simple but profound is 100 times harder than writing something wordy and ornate, and I would have to agree. Michel is one of those great authors with the gift of being able to write works that are often so simply worded, but so captivating and exquisite to read at the same time.

Some of my favorite lines:

"As you reach the truth your solitude will increase, The building is splendid but deserted." (self-translation))

"The truth is scandalous. But, without it, there is nothing worthwhile." (self-translation)

(RNL List #82) The Republic of ShKID" by L. Panteleyev and Grigori Belikh (Russia) 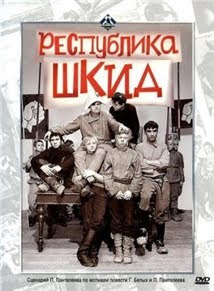 But at any rate, enough with the preamble and straight on into the book review! "The Republic of ShKID" is a classic work of youth literature that every Russian-speaking person has likely heard of. The novel was even made into a very successful film in 1966 by LenFilm.

The novel was originally published in 1927. It is a (partially) autobiographical account of the experiences of two boys (Pantaleyev and Belikh) who grew up in a School-Commune for Difficult Teenagers in 1920's Russia.

The novel is rather long and recounts scenes from the lives of the two boys, their schoolmates and their teachers. It begins with the opening of the boarding school itself by a remarkable pedagogue named Viktor Nikolaevich Sorokin (also based on a real-life person who, by stressing education, character development, self-government, civic-duty and what not, raised model Soviet citizens out of his petty criminal wards).

There are some particularly brilliant episodes, such as the one about a new classmate who starts up an elaborate 'bread lending' scheme. This results in the creation of a class society within the republic of ShKID that includes serfs and a ruling class.

All in all, the novel is a nice breezy read, particularly for a young person, and poignant for every reader, particularly towards the epilogue when we learn about how all of the boys turned out. Its touching and inspiring that this book is actually based on real events and real people. And it is sheerly incredible the influence that one dedicated teacher had on a group of 'hopeless' children, and consequently- through the book and movie-  on entire generations of teachers and pedagogical organs.

One of the cutest things about the novel is the kids' unique use of slang and invented jargon that peppers the entire narrative. Of particular note are the sheer number of acronyms that the kids think up for almost everyone and everything, as an attempt to emulate the newly formed Soviet government's penchant for 'acronymizing' long and difficult titles. For example, ShKID in Russian stands for "Dostoyevsky School". Even the teachers, including Viktor Nikolaevich have been 'acronymized (VikNikSor).

Unfortunately, I doubt that this book was ever translated into English. It may be possible, however, for a non-Russian speaker to watch a subtitled version of the aforementioned 1966 movie, however, though I hate to repeat an old cliche, despite the superb acting, the book is much much better than the movie. 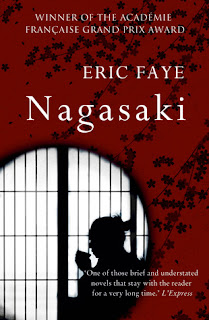 Now this is a sweet little novel by French writer Eric Faye that bagged him the 2010 Grand prix du roman de l'academie francaise. Briefly, Eric was born on December 3, 1963 in Paris. His first work of fiction was published in 1992.

This very short novel is based on the true life story of an elderly Japanese woman who secretly lived in other people's homes after losing her job and becoming homeless. The novel recounts how the woman was finally found after being 'trapped' by one of the homeowners (an elderly loner himself by the name of Shimura). The later part of the novel, now told from the woman's perspective, is all the more poignant and interesting.

The novel is a novel about the isolation people in big cities may experience, and their longing for home, and some sort of meaning to life that would anchor them to this world.

There's nothing all that deep and grand here, but its a nice sweet little novel too read on a winter's day.
Posted by Anya at 7:22 AM No comments: 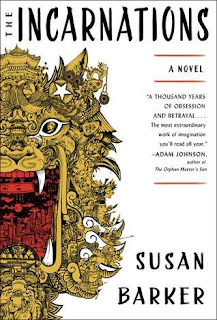 I'm going to do a brief review of a book I read a few weeks ago. This is a book written by half-Malaysian, half British author Susan Barker. A book about China that the author spent some time living in China to write.

The book ("The Incarnations") chronicles the life of a taxi driver named Wang who starts receiving mysterious letters from an unknown person who claims to be his soulmate and to have had several previous lives with Wang. The mysterious 'pen pal' subsequently sends Wang letter after letter chronicling each of these lives (all of which end very badly).

Through these letters, the book takes us to the Emperor's Chambers, into the lives of imperial concubines, to a doomed childhood friendship during the peak of the Cultural Revolution, etc. etc. Its all rather interesting storytelling, but only just. I was hoping that, given that the book was nominated for a major book prize, that there would be some deeper substance or meaning to the novel, however, I was left a bit disappointed with the ending (basically you could interpret Wang as having simply inherited his Mother's madness, or you could choose to believe that there is some weird supernatural link between Wang and the mysterious letter writer). 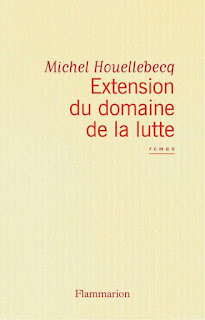 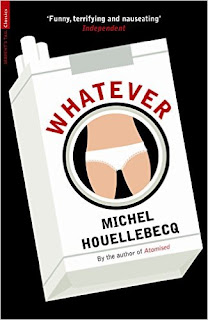 I'm slightly behind at this point on my reviews, as I've been doing a lot more reading as opposed to reviewing. I'd like to catch up, however, with a review of another Michel Houellebecq book. This time, I'm reviewing Michel's very first novel "L'extension du domaine de la latte" (very regrettably, in my opinion, translated as "Whatever" in English).

This was Michel's first book, and a book that rightfully established him as one of contemporary literature's big stars. This was a book that Michel wrote in his thirties, but it too explores many of the same universal themes and questions that Michel explores almost 30 years later in "Submission".

The book is on a surface level about two men who are sort of on the fringe of society because they are unable to find love, and they are unable to find the will to continue on in the 'fight club' that is life. However, the story of these men is Michel's platform for deeper reflections on the meaning (or lack of meaning) of life in our modern-day, individualist society.

Now, compared to other great authors, Michel has had a rather modest output (only 6 novels to date). However, its easy to understand why. He really prioritizes quality over quantity. His books are so quotable. As was the case with "Submission", I found myself highlighting sentence after sentence, paragraph after paragraph of simple, yet profound observations interspersed throughout the novel.

"Generally, on weekends, I don't see anyone. I stay at home. I do a bit of tidying up. I get lightly depressed."(self-translation)

"But I don't understand exactly how people are able to live. I have the impression that everyone should be unhappy; you see, we live in such a simplistic world. There is a system based on domination, money and fear- a primarily masculine system, let's call it Mars; and there's a feminine system based on seduction and sex, let's call it Venus. And that's all. Is it really possible to live and believe that there's nothing else? When it came to the realists at the end of the 19th century, Maupassant believed that there was nothing else and that led him to raving madness." (self-translation)

Now, critics often accuse Michel of writing about himself. That he is his characters. I'm not sure if I believe that at all, but I can understand the accusation. Its just that there's so much emotion, honesty and soul in Michel's characters that its easy to feel that they are real and not simply constructs for the conveyance of an idea. You feel so deeply for them. Michel's books are so full of deep, honest (often painfully honest) reflections that the reader is unable to not feel close to the characters, and by extension, to the author. The ending of "L'extension" literally moved me to tears and I could think of nothing else for a week. (Sign of great novel). My first thought as well, after reading the novel was to read it again (Sign of another great novel).

I have to say that Michel is truly in a class of his own amongst contemporary authors (as far as I am concerned). I will definitely be returning to Michel's work in upcoming weeks.